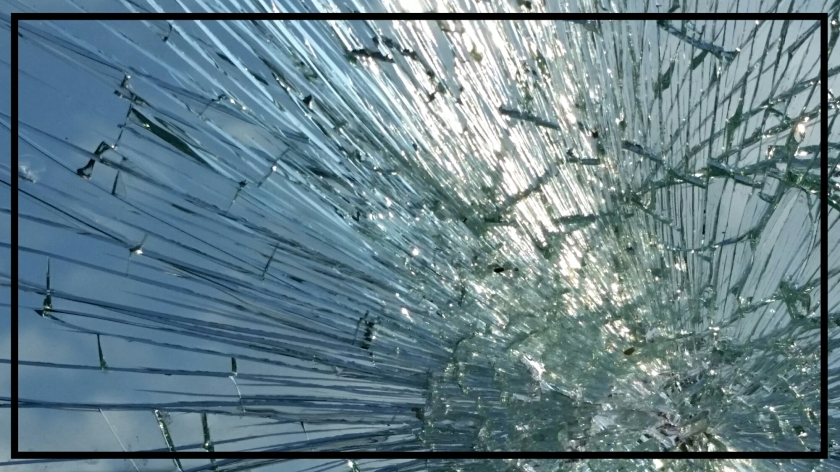 This is a picture of currently available mental health and crisis services for people in many states. Some pieces are broken and smashed to dust. Others are completely missing. They no longer all connect, but only by the grace of God, some light still gets through.

This is an actual vehicle windshield that has been kicked by a child. The child was sent home less than 24 hours prior to the damage from an ER crisis assessment by a contractual worker in which the parent was dismissed and armed with only a paper behavior contract and a referral to the worker’s employer for outpatient counseling. Nevermind that the parent had clearly stated the child’s history of trauma, past failed attempts at outpatient, and other clinical issues. Nevermind that the child had been so distraught and out of control (mental health and grief issues not discipline issues) that a handful of police officers physically had to carry the child to assist in de-escalation and transportation to the ER. The worker indicated that risk to harm self or others was no longer enough for the child to be hospitalized in order to become stable and transitioning to appropriate treatment. He would have to state that he wanted to kill himself or someone else. Jumping out of a moving car would not be enough intent to harm self unless he stated he was trying to kill himself, and throwing objects at someone or grabbing a steering wheel was not intent to harm others unless he would specifically state he was trying to kill them.

This is where it got worse: the contractual crisis worker was fixated on whether or not the parent would profess some type of refusal to take the child back home with only the outpatient referral and behavior contract. The worker told the child, who already had residual attachment and trauma issues from time stuck in the child welfare system (from which the child was already rescued and adopted,) that if he did not go home he would be placed back in foster care. That is absolutely unacceptable as “mental health treatment” or treatment of another human being. Period. The crisis assessment actual made a bad situation even worse and more dangerous. Consequently, the child became extremely upset later but refused to see a counselor for fear he would never see his adoptive family again if he had to be hospitalized. This is how the windshield fared in that conversation…

Unfortunately, this is not at all an uncommon scenario among families in which a child is unable to access appropriate mental services. Youth who have a history of trauma or attachment issues fall into this category. It appears that the percentage of children with significant residual mental health issues that have been in foster and adoption services is much higher than actually reported.